The first app in the TIME Immersive series is based around the 50th anniversary of the Apollo 11 moon landing.

TIME, the media company best known for TIME magazine, has entered the augmented reality marketplace. The Landing on the Moon is its new app, based around the Apollo 11 moon landing. It’s the first in a series of projects from TIME Immersive, which bills itself as a new way to experience the organization’s journalism.

The AR app allows users to place themselves in a historically-accurate recreation of the Apollo 11 landing in July 1969. The app was developed in partnership with the Smithsonian’s Air and Space Museum. However, it’s not related to the Smithsonian Channel’s Apollo 11 AR app. It is available on both iOS and Android.

“With Landing on the Moon, TIME is building on its decades of trusted and authoritative space reporting to tell this story in a brand new way, just as we have done in previous projects such as our Emmy Award-winning documentary A Year in Space,” said Edward Felsenthal, TIME editor in chief and CEO.

The National Air and Space Museum is home to the most extensive collection of Apollo artifacts in the world. This trove of information made it a natural partner for TIME and the Landing on the Moon app.

Nick Partridge, the museum’s director of strategic partnerships, said TIME’s coverage of Apollo 11 in the 1960s helped shape how Americans view space. He hopes the app will do the same by helping today’s viewers see space in a whole new way.

“This AR activation brings our artifacts to life like never before,” Partridge said. “We hope it inspires a new generation to define their own 21st-century Moonshot. We are excited to present Landing on the Moon with our partners at TIME, whose Apollo-era reporting helped shape the way Americans experienced the space race.”

A New Form of Journalism

TIME is one of several news outlets experimenting with AR and VR in journalism. Outlets like The New York Times and business news site Quartz are also taking the plunge.

With TIME Immersive, the company hopes to use the skills of its reporters and visual journalists to bring news-related content to users in a new way. The goal is to foster a deeper connection between journalists and viewers.

See Also:  Virtual Reality and the Future of Journalism

Mia Tramz is TIME’s editorial director of enterprise and immersive experiences. She said TIME Immersive and the Apollo 11 app are natural extensions of the company’s well-known visual journalism.

“With the launch of this app and our first web AR experience, we are putting a stake in the ground with AR and establishing the level of immersive journalism,” Tramz said. “Everything you see in this and future AR experiences is based on the same kind of rigorous reporting and research that goes into all TIME projects.”

The Apollo 11 app is the first in a series of immersive projects on the way from TIME. The organization plans to release additional experiences. In particular, those around the 1963 March on Washington as well as life inside the International Space Station. 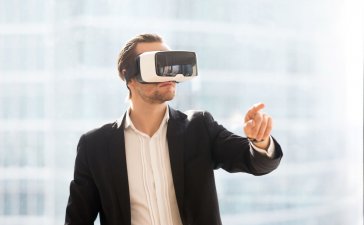