Some of the most innovative companies building immersion through AR and VR accessories.

When it comes to XR hardware, headsets tend to get most of the hype. And, who’s to argue? However, there are some great AR and VR accessories out there that can make an XR experience more immersive, more practical, or better suited to a specific task.

You’ve seen our list of VR headsets. You’ve read our list of AR glasses. Now get ready for the ARPost guide to AR and VR accessories, peripherals, and modifiers.

MANUS creates gloves for both motion capture as well as for controlling sensitive VR applications. The company also makes haptic gloves for adding an extra layer of immersion to VR experiences. Right now, some of these products have limited out-of-the-box utility, but integrations with experiences, software, and hardware platforms are expanding all the time. The most recent MANUS product is the SteamVR tracker for precise gesture controls and motion capture.

“As one of the very first companies in the world to get access to the SteamVR technology, we hope to improve the workflow of creative professionals around the world with our very own professional tracker,” CEO Bart Loosman said in an interview shared with ARPost.

MANUS doesn’t just make VR accessories, MANUS makes accessories for accessories. These include charging stations and interchangeable battery packs for long or frequent use, and adaptors for hardware from companies like VIVE, Oculus, and Antilatency.

SenseGlove also makes haptic gloves for VR experiences. The Nova is the experience model, but the company also makes a developer kit for research purposes. SenseGlove can also be used for motion capture, but currently only works in this capacity with the Pico Neo line. However, the company promises coming integrations with other inside-out tracking headsets.

HaptX makes haptic and finger tracking gloves that claim “sub-millimeter accuracy” in VR and robotics applications. The motion tracking is done with magnets instead of the markers used in other VR accessories, but the haptic feedback is all pneumatic.

See Also:  HaptX Wants to Put You in Touch with the VR World

One model also features “microfluid technology” for “dynamic force feedback” that they claim is more realistic than that of competitors. Another model, with a more complete “force feedback exoskeleton” is meant for conveying not just touch, but pressure. 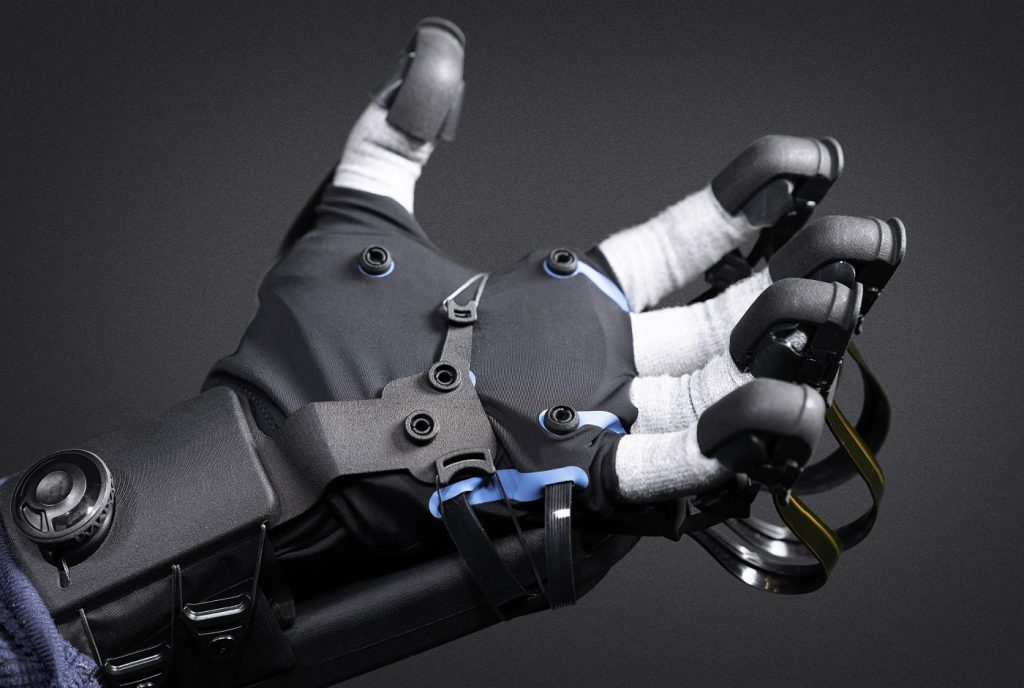 Finch first came to our attention at ARPost when AR glasses maker Nreal announced a partnership with the company earlier this year.

Etee does “finger tracking” a little differently. The line of controllers made by this company largely consists of a bar that the user holds onto. When the user applies or releases pressure on the bar, it registers in the application. The body of the bar tracks the fingers, and a trackpad at the top tracks the thumb. Tg0, the company behind the Etee controller is, like many of the VR accessory makers discussed in this article, not exclusively VR. Etee can be used in VR or AR, or in non-immersive digital projects. These can be used one at a time for 3-degrees-of-freedom applications, or in tandem for more involved experiences.

The most interesting thing about the Etee “bar” controller is that there are currently two different tracking systems that the user can remove or replace depending on their need. That makes it even more exciting that the Etee online shop has an “appliances” section littered with “coming soon” tiles. We don’t know how soon, but we’re watching.

Feelbelt is a German VR accessories manufacturer that proved its chops last summer by completing a successful crowdfunding campaign. The system consists of a haptics belt with ten pulse generators. Connectivity can be wired or wireless depending on the hardware generating the experience, as Feelbelt works with VR as well as health, music, and other applications. Of course, Feelbelt is more about sensation than total immersion. If someone taps you on the shoulder in VR, you would still just feel sensations like this on the belt. But, it will get your attention.

If your idea of VR accessories comes from science fiction and television, you might think about things like full-body suits that even convey sensation. As it happens, these things already exist, and you can order them from bHaptics. The company is probably best known for its lines of haptic vests and other wearables that make VR more immersive by bringing in more of your senses. They don’t have all of you covered, but they come close.

DecaGear is promising a high-performing but affordable headset that may be the first real competition for the Quest in the US and Europe. This headset has yet to make its way into users’ hands, but one component of the eventual Deca system is available: DecaMove.

DecaMove is a hip-worn motion controller designed to allow the user to control motion in VR via hip movements in a way that is safe and natural.

For the most part, the AR and VR accessories discussed in this article are for more-or-less general use. However, there are a growing number of specialist accessories that are also becoming increasingly available.

As all things enterprise eventually find their way to consumers, these are at least worth thinking about, even though they may be years away from store shelves – or never hit store shelves at all. The Logitech VR Ink Pilot Edition is an industry design tool right now. However, given the size of the VR art market, VR accessories like these may one day create a new artistic medium.

Similarly, Xenco Medical is a medical device company first and an extended reality company last. However, the company is using models of its real surgical devices as hyper-realistic air controllers in their augmented reality education tool HolomedX. While this platform is still in its infancy and is currently limited to Xenco, the genie may be out of the bottle.

We tend to think of AR and VR displays first. But, a lot of work goes into immersive audio, and with AR and VR accessories like those discussed above, XR can physically feel more real as well.