Our long-overdue walkthrough of AltspaceVR.

ARPost has covered plenty of events in AltspaceVR before, from Burning Man being held virtually in the platform, to the XR Safety Week using it to make talks on immersive technology more… immersive. But, we’ve never dedicated an article to actually exploring the platform.

It could be that we take it for granted. As a platform for free virtual spaces that doesn’t require a VR headset, it’s how many people experience VR for the first time. If you’ve never used AltspaceVR before, consider this your invitation. If you have, we hope that you’ll still enjoy this article.

A Brief History of AltspaceVR

AltspaceVR launched in 2013 and became available to the public two years later. The following year it launched on Steam and the year after that, it was purchased by Microsoft in a bid to expand their mixed reality portfolio which has always been a kind of awkward collection.

Initially, the purchase by Microsoft didn’t mark many major changes. Users of the desktop app now had the option to sign in via a Microsoft account, but Steam users were largely unaffected, as would be Oculus users beginning in another two years.

After all, AltspaceVR doesn’t have any in-app payments, and it doesn’t have any kind of email-facilitated communication feature, so logging in with a Microsoft account doesn’t make the platform more usable or anything like that. That’s not to say that the acquisition didn’t bring anything to the platform – it just took a while.

The single biggest boon has been the integration of Microsoft Mesh, announced at the Spring 2021 Microsoft Ignite. Microsoft Mesh allows the “holograms” of a person to appear in a virtual space, but it also allows the digital twin of a physical space to play host to VR avatars. We have yet to see the full potential of this, but some ambitious projects are already using it.

The key difference between using AltspaceVR in a headset and using it on a desktop is the controls. Despite being a VR-first platform, the controls are, arguably, more easily navigable on desktop. The biggest benefits to the VR version are related to tracking.

VR controllers enable hand tracking. For users of the desktop mode, the avatar’s hands lay at the sides, unless involved in an emote triggered through the in-game menus. Although, because AltspaceVR avatars don’t have arms, sometimes hand tracking makes things a little more awkward.

A headset also enables head tracking. Desktop users can simulate head tracking by moving the mouse where they would like the avatar to appear to be looking.

Whether you use a headset or a desktop, the first thing to do is customize your avatar. If you haven’t logged on in a while, this is definitely something worth revisiting, as the platform’s avatar creation system has been majorly updated. For one thing, clothing options and settings for your avatar’s body type are no longer locked based on gender that you choose when signing in.

You want your female-coded avatar to wear a vest and tie? Go for it. You want your male-coded avatar to wear a big floppy sun hat? Make it happen. You don’t think your avatar needs an obvious gender? More power to you. The same goes for your avatar’s skin color – with over 300 shades and colors to choose from, including greens, blues, and anything else you can think of.

Once you have an avatar nailed down, first-time users should explore their Homespace. Honestly, the Homespace is kind of boring. You can’t customize it at all, and most of it isn’t very interactive. But, it’s a private space where you can learn the menus and navigation tools before going out into the wider virtual world. There’s also a full tutorial that you can take at any time from the Main Menu, but I’d rather bump around my house for a bit when I need to refresh myself on the controls or check out an updated interface.

The controls are pretty simple, no matter what device you’re using. All main controls radiate out from the company logo on-screen, and some of these open up into a deeper layer of menus when selected. The main difference on desktop is that most of the interactions have associated keyboard shortcuts so things go a little quicker when you know your way around.

There is one cool interactive feature in your home: a basketball hoop, with unending basketballs. For me, this court is one of the greatest little joys in all of VR. Very seldom do I go into AltspaceVR (or into my VR headset at all) without shooting a few hoops and watching the dust clouds rise out of the basket when I make a shot. No matter how much you like throwing virtual basketballs, your Homespace is bound to get boring before too long. But that’s okay, because the platform is really all about events. You can check out events online even without an account, but they also take up a page in the Main Menu.

There’s always something going on in AltspaceVR. From live comedy shows, to support groups, social events, creative and professional workshops, and religious studies, whatever you want to do, chances are it’s happening soon. And, if it’s not, click on My Events and then Create Event to host your own online event. 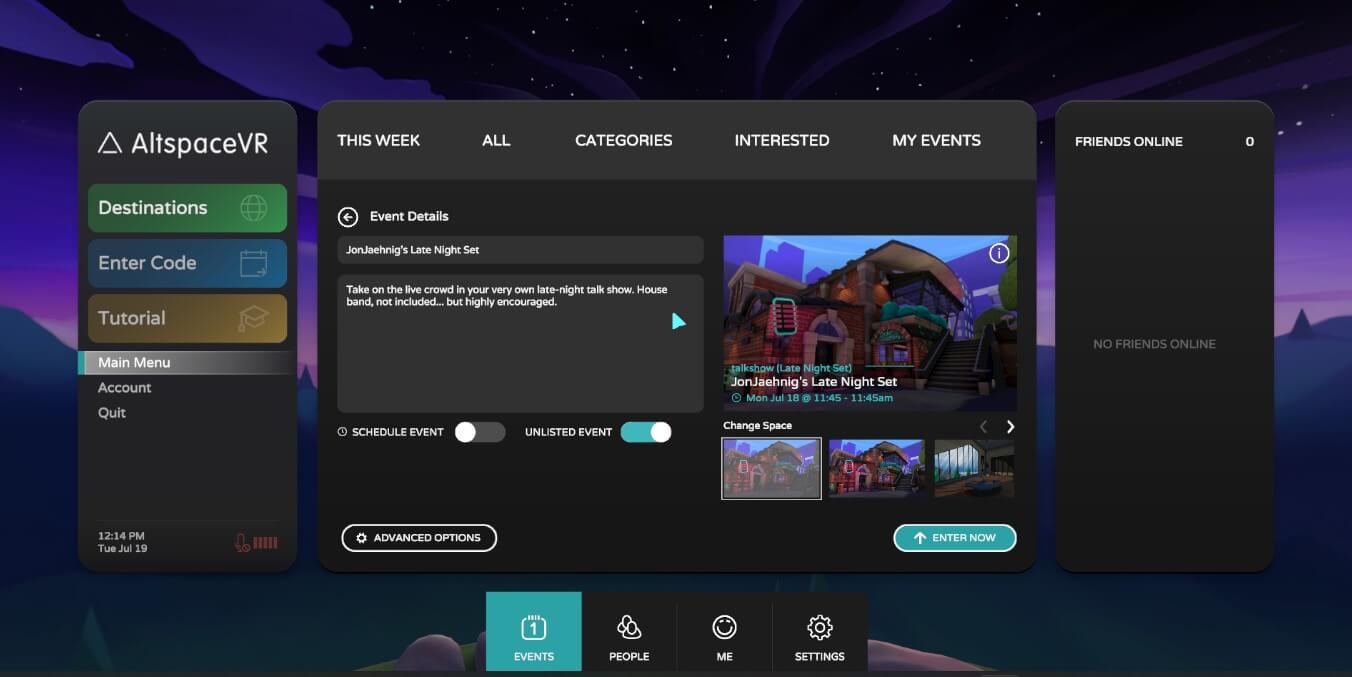 The ability to create spaces grows with the user. You can start off with templates, but dedicated creators make their own worlds. One of the most impressive I’ve seen is the world where the Polys Awards take place in AltspaceVR but very experienced hands created that world. Everyone starts somewhere.

See You in VR!

There are probably one or two more articles that could be written diving into the interfaces a little more deeply. For example, the pictures that you take in the platform are saved to your profile so you have to log into the web interface to retrieve them – even when you took them from in the VR version.

However, for now, we hope that this introduction or refresher to AltspaceVR has gotten you eager to explore one of the friendlier and more accessible virtual worlds out there.