We take a look at SAP’s new immersive learning platform after its first test run.

Software group SAP knows that the world needs smart people. But, being smart isn’t always enough. A growing body of research shows that we need “soft skills” too. These are skills that you can’t read in a book – they have to be practiced through lived experience, or increasingly, through immersive learning experiences that simulate real-world situations.

To help “young learners” develop these soft skills, SAP worked with JFF Labs to create the Skill Immersion Lab, with curriculum content developed by Talespin. The first immersive learning sessions concluded in three locations around the US this summer, and SAP is ready to talk about the results.

Getting the Team Together

SAP is a multinational company headquartered in Germany that creates “software for the management of business processes.” However, like any good manager, SAP is also concerned with things like sustainability, personal growth, and wellness. To foster these additional initiatives, the company isn’t afraid to reach out to other experts and service providers.

Que JFF Labs. JFF Labs is an American non-profit organization that works with educators and enterprises to promote health and equity. Other partners of JFF Labs include the Departments of Labor and Education, the Bill & Melinda Gates Foundation, Walmart, Salesforce, and Google.

The final piece of the puzzle is Talespin. We’re not saying that no one was talking about soft skills before Talespin came along, but Talespin did a lot to keep “soft skills” and “VR” in the same breath. The company that uses AI to create VR social and emotional learning modules started really gaining steam in 2019, and hasn’t slowed down.

“In short, our aim was to use virtual reality as an effective teaching tool,” Katie Booth explained in an SAP blog post. Booth is SAP North America’s head of Corporate Social Responsibility and was largely behind the implementation of the Skill Immersion Lab. “The Skill Immersion Lab integrates immersive learning via virtual reality with instructor guidance and discussion.”

To some readers, it may sound like SAP is pioneering immersive learning, while to others it may sound like they are just one of many organizations to roll out such a program. The truth is that it’s a little of both. SAP is hardly the first organization to explore immersive learning, but it’s certainly not something that we have pinned down just yet.

There are a lot of different ideas about what exactly immersive learning should look like. Further, just like with conventional education, there isn’t going to be a single model that works best for every student. As a result, every new outfit that tries its hand at it is both trailblazing and contributing to a larger understanding of what works, for whom it works, and why it works.

“Probably most important is our goal to offer different program tracts to help learners achieve their goals,” said Booth.

While it was designed for working professionals, the Immersive Skills Lab’s first run, which concluded this summer, was completed by about fifty students between the ages of fourteen and twenty.

The program was rolled out in a New York City high school, a St. Paul, Minnesota youth group, and a Hammond, Louisiana vocational education program. These students were students who “do not typically get first access to technology like this,” according to SAP. That means that the students got to try something new and that SAP got results from fresh students new to VR.

“We chose these sites very intentionally. They’re in different and diverse parts of the country, ranging from urban to rural, and in different education programs and pathways,” said Booth. “This meant learners with different backgrounds, experiences, and environments participated.”

Despite the first round of learners being younger and less experienced than the program’s actual target audience, the results were spectacular. Students overwhelmingly reported increased confidence, as well as having had fun while in the platform. Most also went above and beyond, completing optional activities like checking for correct answers or repeating modules. 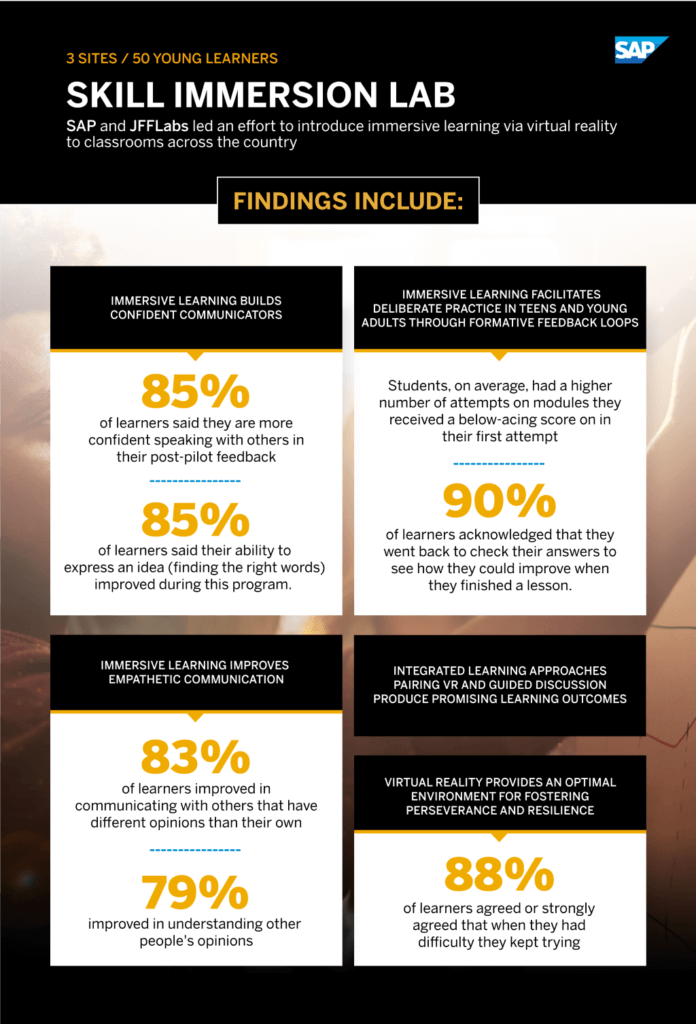 SAP didn’t only come away with valuable feedback about how students learned. The company also learned a great deal about how the subjects were taught. Booth commented that the VR component allowed students to workshop skills that they were learning but that they learned and contextualized those skills with their human instructors.

“This program was more than teaching students via virtual reality,” said Booth. “We found that an effective approach was in the guided discussions instructors at each site facilitated. Our results indicated that this guidance was an influential factor in students learning the content.”